Every Church service will involve a reading from the Bible. More often than not the sermon will be based on the reading and the preacher will explain in their own words how they see the reading relates to our lives today and what the message is for the people present. Most Christians will also read the Bible at home, often influencing them in their daily lives. 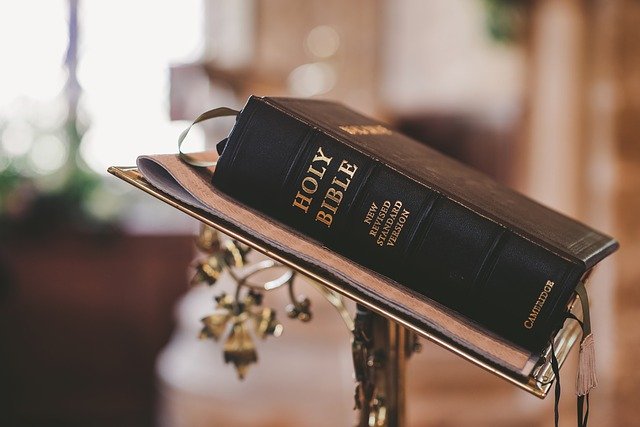 The reason the Bible is so important is that Christians believe God reveals Himself through its pages. The Bible tells of God’s encouragement and inspiration it often guides Christians through predicaments they find themselves in, and shapes their views and beliefs. Above all, it tells of the presence of God in the life, death and resurrection of Jesus Christ.

The Bible is undoubtedly complex with many difficult passages. Everyone needs help in understanding it and exploring its treasures. The best place to start is not necessarily at the beginning, but with the four Gospels at the start of the New Testament – Matthew, Mark, Luke and John. Mark is the shortest and fastest moving and can be read in a couple of hours.

The Bible is printed as a single book, but in fact it is a collection of sixty six books that were written over the course of a thousand years, from about 950 B.C to 100 A.D. The first three-quarters of the Bible is the Old Testament (the Jewish Bible): a record of the Jewish nation  and the old covenant (promise) between God and his chosen people, Israel. For Christians it describes how God prepared the people for the coming of his chosen representative on earth, the Messiah. The New Testament is a record of how God went a stage further by delivering a new covenant for the entire human race, through his Son Jesus Christ.

Amongst the books of the Bible are a wide range of, dramatic poems, lyrics, ballads, songs, proverbs, meditations, prayers and letters. As well as reflecting the culture of their times, the words of the different books inevitably reflect the authors’ limited knowledge of the world at that time. Many of the stories in the Bible were passed down from generation to generation by word of mouth and were not written down until much later. The Church has studied these sacred texts for nearly two thousand years and there is a lot to be gained from the biblical writers and scholars of every era. Christian belief is that through all of the Bible’s diversity, and the range of human beings involved in its writing, when we study, read and hear the Bible, God is talking to us through its pages.